Class 6 have been learning about electricity this half term and in our session we were able to consolidate that information with an orienteering challenge, a electricity symbol relay and a ‘Human Circuit’ game.

For the Human Circuit game there was an additional challenge in that once the basic rules had been explained to them, the children had to find a way to organise themselves and sort things out for themselves. Everyone afterwards agreed that working together, ensuring everyone’s voice was heard and the listening to everyone was really difficult

This was particularly pertinent as it was the day before the general election and we had spoken about adults shouting and insulting at each other and not listening to each other’s point of view.  After an unsuccessful beginning, one group ended up being directed by one of the quieter, more reserved members of the class. Afterwards he said how happy and proud he was that people had listened to him and given him the opportunity to express his ideas as he didn’t feel that this is often the case. The other children agreed that quieter people should be given the opportunity to speak as they may well have valuable ideas and thoughts.

After recapping the rules and expectations of the Outdoor Learning sessions, we spoke about animal classification and the many different ways they can be grouped.  During the session, we focused on invertebrates.

One child had requested to have a closer look at the skull of a Roe deer we have in school and this stimulated a discussion about the culling of animals. We spoke about how everything is connected and how too much of one species can influence everything else in its food chain.  Deer eat plants, which insects rely on for their food and habitat.  Fewer insects’ means less food for small mammals and birds which then affects the next level in the food chain.  Landslides may occur if all the vegetation goes due to over-grazing by the deer.

We discussed how the deer population has flourished in Scotland, where the deer skull came from, because they have no natural predators anymore as wolves no longer roam the UK.  When asked the question as to whether it was a good or bad idea to reintroduce wolves, there were some extremely well thought out answers from it being a very bad idea because of potential problems it could cause, to that it was probably a good idea, but it would need to be managed well.

We got on to the topic of artificial grass somehow and how environmentally harmful this product is; it is made of plastic and nothing can live in it.  We all agreed that it can be very useful but there were different opinions as to whether it’s use is justifiable.

We tried to work through the Natural History Bug Count booklet but ran out of time.  The children were so engrossed in examining the insects they found, we didn’t manage to get through it all.

One group found a dead vole and examined it closely to see if they could work out how it had died (CSI eat your heart out!) It is only by looking closely and investigating our natural world that we can begin to realise how astonishing and precious it is. Once we realise this, there is more of a chance that we will look after it.

Charcoal and Capture the Flag.

High winds prevented us from making our own charcoal on a fire but we discussed the impact of humans making charcoal. We were able to play with the charcoal that had been made in a previous session and explore its properties and uses.

As we were unable to do as we had planned, we played ‘Capture the Flag’, a game of strategy and teamwork. The teams had to create and decorate their bases, appoint a chieftain and come up with a war cry and winning strategy! Good fun was had by all.

Class 6 built hides in order to stay warm during our outdoor lesson bird watching. The inventiveness and creativity the children demonstrated in building them was fantastic. They thought about how they could make them more camouflaged and painted the cardboard with mud. One group made rope swings once they’d finished their hides, developing their problem solving skills, fine motor skills and having a great time into the bargain.

Oh my,  how blessed are we!

We are nearing the winter solstice and soon the days will be longer again. Holding a celebration at this time of the year goes back thousands of years and various cultures and religions have developed their own traditions to give thanks for what has past, pray for the return of the sun and for blessings in the future.

We decided to hold our own solstice celebrations with a fire, food, crafting and a time of reflection as we leave this year behind us and look towards the end of the children’s time at Stanley Grove and new beginnings.

The children were invited to use the fire, a potent symbol of rebirth and purification, to get rid of something that no longer serves them well. Maybe it was a memory of a red card or argument that has been troubling them.  Writing it on a card and putting it on the fire releases it, and themselves from any unhelpfulness that it might have brought.  This is done with gratitude for all they learned from the experience and compassion for everyone involved.  Ms Shaw has, once again, released her disorganised, chattering mind; maybe one day it will leave for good!  Following this they were invited to think about what they might need to help them during the coming year and to take a card with a gift of blessing on it.

We baked some of the apples that we had picked and stored from the autumn. Again it was interesting to think about how we might have become used to only eating the most perfect unblemished fruits despite ours being perfectly edible. We spoke about how important it is to conserve the earth resources; even if they are slightly bruised, apples still taste delicious when cooked on a fire and covered in cream, (especially if they aren’t left on the fire for too long and burnt, sorry about that!)

While the apples baked we made orange and clove pomanders, the orange to symbolise the returning sun and the cloves to make our homes smell like Christmas!

We had Yule Log to put on the fire but when we looked closely at it we saw a heart running through its centre, so we couldn’t burn it. We’ll try and slice it so everyone can have keep a bit of the ‘heart’ of their first school solstice.

Some children connected to their ‘inner warrior’ donned bandanas and went hunting bears. Gosh. The experiences gained at Stanley Grove really are very varied. They came back with their own warrior chant and a sizeable stick ‘bear’.

May thanks to our wonderful volunteers, Miss McKenzie and Justine, we couldn’t have done it without you, and thank you to year 6, you are just wonderful. 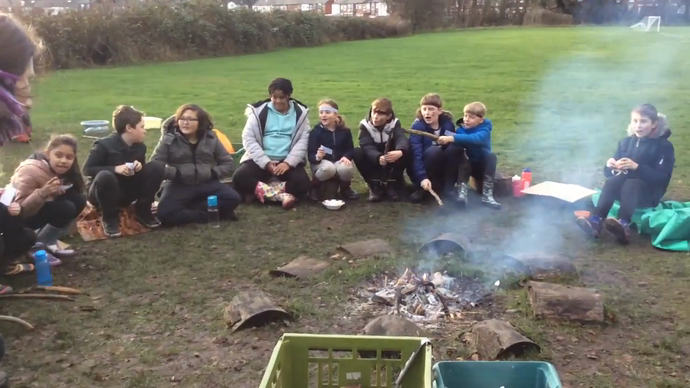 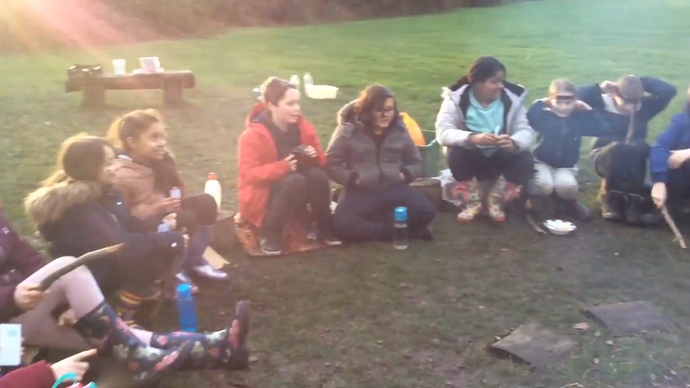 This term we copied our hunter-gatherer ancestors in the ancient activity of foraging for food. Each season provides a huge range of free food. Some people might call this food ‘weeds’ but as we know, the difference between a plant and a weed is just an opinion.  We thought about why we might have got out of the habit of eating the abundance of free food that is on offer.

We spoke about the importance of being safe and being able to accurately identify wild food before you pick or eat it.  If in doubt, don’t!

Through this activity the children were learning about:

In order to hone our observation skills before we set off  foraging, we played a game of ‘Photographic Memory”.  The children had to work as a team and had 30 seconds to take a mental picture of 10 natural items placed in a certain configuration on the floor and then had 5 minutes to replicate the items and configuration as accurately as possible.

Photographic Memory game.
Free food available from our school grounds.
We decided against eating our chickens!
But the apples were delicious.
“I just need to get that one up there.”
So many apples this year.

This half term we worked with fire and developed the skills required to do this safely.

The children looked at how man’s ability to sustain and re create fire changed the way we live; from cooking the food they ate so they didn’t become ill to making charcoal in order to be able to alter the state of various substances such as being able to extract minerals from rocks.

We made our own charcoal in the fire and used it to draw with - the original body paint!

We spent a very soggy but fabulous day making nettle and wild garlic soup, using the nettles we harvested from the school field, toasting damper bread and making drop scones. The children showed great perseverance and resilience in building the fire and keeping it going despite the weather. Well done everyone 😀

Food preparation al fresco.
Cooking bread on the fire while the soup simmers
Camp fire cooking
In go the freshly picked nettles.
Bon appetit
The washing up team having fun while they work.
A mixed response to the soup!
Using friction to create fire.
Making charcoal on the fire.
Showing off the body art.
Ta da!
Using our charcoal to write.

Class 6 have taken part in the RSPB's annual Big Bird Watch. Getting involved with events like this helps the children develop many things including :

We played the 'Magic Carpet' game at the beginning of the session.  This game helps develop:🌿Co-operation 🌿 Communication 🌿Team work 🌿Listening skills 🌿Problem solving. The aim of the game is to flip the 'Magic Carpet' they are all standing on over to its other side

without anyone stepping off the 'carpet'.

It was fascinating to see them try to work out what it means to work together as a team, how consensus takes time, compromise and effort and how not everyone will listen to one dictatorial voice, irrespective of how reasonable that voice thinks it is. We thought about how the challenge of working together, making sure everyone's voice  is heard and opinion respected is similar to how politicians try to govern countries - or not! Neither group managed the games desired outcome, but there was a lot of learning during the process.

How birds attach nests to branches is fascinating!
Looking closely at nature helps us appreciate it.
Watching for birds.
"Look!"
A quiet corner.
We saw lots of nests in the leafless trees.
Teamwork?!?
Art work while 'twitching'.
Artists impression, good isn't it.

Using tools for wood craft helps develop many skills including;

Learning can be so much fun! Here are a few of class 6's creations.

This term we looked at foraging. We thought carefully about the importance of knowing what is poisonous and what is not and of never eating anything with being completely certain that it is safe to do so. We learned about things that people used to eat like 'haws' and 'hips' and the nutritional value that these wild, free plants can provide. We spoke about why gathering wild food might have gone out of fashion and the effect of supermarkets on what and how we eat.

Looking closely at the wonders of nature helps us learn to appreciate and value it. We examined a deer skull, dried dragon fly, bird, and frog and were amazed at their differences and how intricate they are. It really is an astonishing world that we live in.

Wild food from in ourschool
A little maggot enjoying a feast.
Looking at the wonders of nature.
"What has happened to this?"
"Wow!"