Feedback to our children regarding their contribution to the Climate Change Conference. May 2021

As part of our on-going commitment to ensuring that our children are provided with the widest opportunities to engage in Physical activity, we have again this year been part of 'The Schools Yorkshire Tour'. As ever, the whole school came together to support this important event and it is great to see this recognised in the email below which confirmed this and as a result of this, our invitation to the 'The Schools Yorkshire Tour Celebration Event ' being held in Doncaster.

Another Schools Yorkshire Tour is over (sob) and what a brilliant event it was.  Just wanted to say a massive thankyou to all the schools who once again were fantastic and some epic rides by the kids.  New bikes this year that were clearly better than the hire bikes we have used in the past meant less accidents though some still managed to fly over the handle bars or slip on some gravel etc but no major bumps, phew. Weather was generally good but poor South Parade got the worst of the weather and got drenched.

The welcomes and send offs we received were epic this year and it never gets old, it must feel brilliant for the kids to be welcomed like that from another school. As we stated in a previous email we said we would choose the school that attends the celebration event that gave the best send off and welcome and to be honest that was a really tough decision to make as so many schools did such a brilliant job.  However one school just pipped it and that was Stanley Grove, they had the winning combination of the whole school out, all the teachers including the headteacher, homemade banners, refreshments for the cyclists and some banging tunes to build up the party atmosphere. I will get in touch with Stanley Grove and explain the details but it is a fabulous day out and not to be missed.

I am sure you guys have taken some amazing photos and we would love to see some of them so if you can send any that would be smashing.  Also if you would like to win the baton please post some to twitter using the hashtag #SYT2019

I want to thank my colleagues who without the event would just happen, John Gallagher it’s his baby really and he does all the organising, when he’s not travelling the country collecting scrap, Jonny for just being Jonny it just wouldn’t be the same without him and certainly wouldn’t be anyway near as fun, also its good for him to see the sun now and again.  Karen and her van and her amazing organisational skills, the glue that holds it all together.  Chris for repairing our bikes, motivating the back markers and making sure kids get there in one piece and Oscar for providing the eye candy, shame he couldn’t do it on a Bike to Work bike.

Finally if you want this event to continue and we are under pressure from our bosses to stop it (they consider it a poor use of staff resource) then please get back in touch and tell us how you value the event and why you would want it to continue, we need to persuade them to keep it going as we thing it is a fabulous event to celebrate cycling with our children and young people.

It is important that we get feedback from our stakeholders and act upon this. Please click links below to see parent feedback questionnaires and our actions in response to this feedback.

Please see below for recent pupil survey results which have been devised by Mrs Priest and the school council.

We are always proud of our pupils, especially when we get feedback from other people.  Please see some of these lovely comments below.

Thank you from Wakefield Hospice for your kind harvest donations.

Lovely feedback for Reception, for their beautiful singing whilst visiting St Swithins Court.

You are yet again one of our winners! Congratulations! Your school did extremely well at collecting electricals and we will be arranging to drop a tablet off at your school.

Not only did you win one of our tablets but you were one of the top performing schools so we will be making a special commendation to you in our press story.

Well done to all of the children who helped to achieve this. We calculated the result using the amount of electricals collected and the amount of pupils involved in the campaign. Your score was 1.32 items per child which is a fantastic result!

I just wanted to let you know, your children were good today in the Learning Zone. They completed The "Belle Vue Egg Challenge" with great enthusiasm! The children worked in groups of three and four, to design and make a "Transportational Device". They then used their "Transportational Device" to get an egg from the second floor balcony to the ground safely. All three of the groups succeeded in getting their eggs down in one piece and without any cracks! All the children worked extremely well using great teamwork skills.

We are looking forward to welcoming the children back into the Learning Zone next Monday when hopefully (training schedules permitting) the children will interview one of our first team players.

Kind words from the Learning Zone team for a group of pupils from Class Five who are attending team building workshops.

Today’s session started with an introduction to the Wildcats and the Wildcats Learning Zone.Things didn't go according to plan. When it was time to go out and have a stadium tour, the weather threw everything at us. We had hail, rain, thunder and lightning. All the walkways around the stadium were flooded!! Unfortunately, we only got to look at the stadium from the Learning Zone Balcony. But the children took everything in their stride and we did the "Speed Stacker" cup challenge instead. Hopefully the weather will be better in the coming weeks (fingers crossed with our lovely English weather!) and we will be able to do the stadium tour another week.  I have attached some photos of the children at the Learning Zone today.

Next week the children will take on the "Belle Vue Egg Challenge". The children will work in small teams to design, make and use a "Transportational Device", to transport an egg (a really egg, un-cooked!) safely from the second floor balcony to the ground without any cracks!

Jack and I are looking forward to welcoming the children back into the Learning Zone next Tuesday. 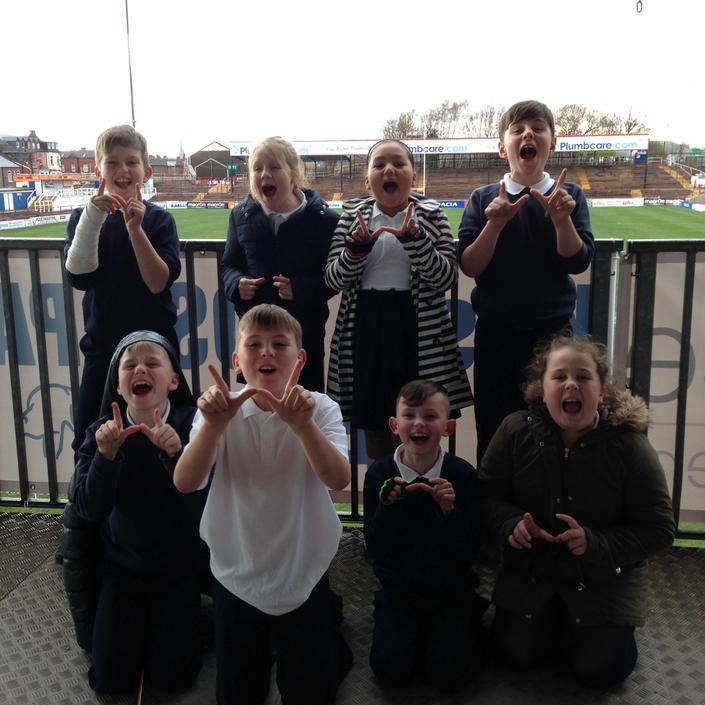 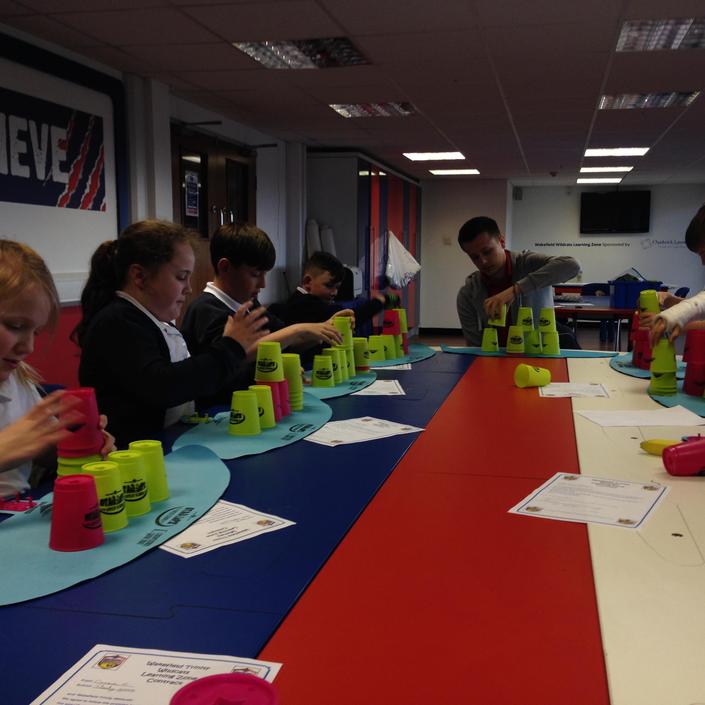 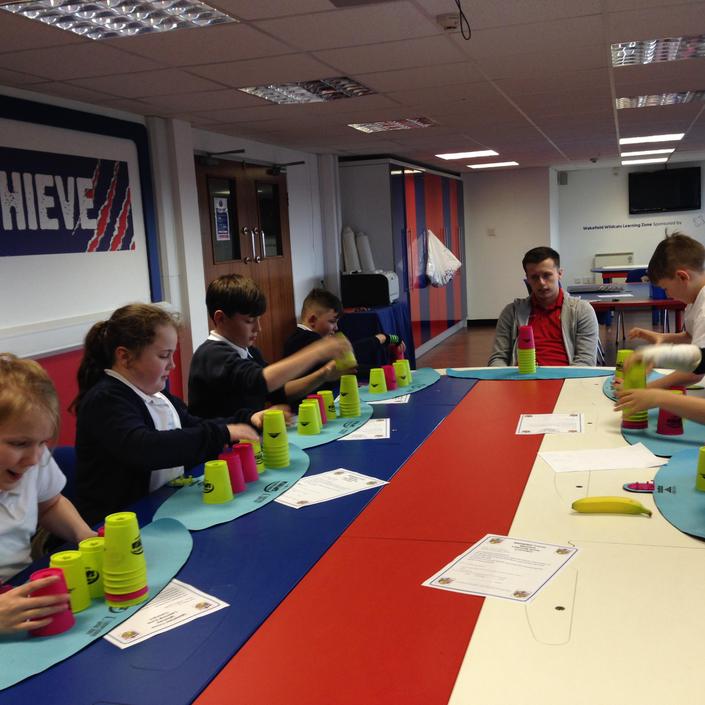 Louise Bragan from the Museums Learning service, sent the following letter to school after Class Five's visit at the end of October.

Unfortunately not the ones with chocolate chips.

Some cookies are necessary in order to make this website function correctly. These are set by default and whilst you can block or delete them by changing your browser settings, some functionality such as being able to log in to the website will not work if you do this. The necessary cookies set on this website are as follows:

Cookies that are not necessary to make the website work, but which enable additional functionality, can also be set. By default these cookies are disabled, but you can choose to enable them below: