Our children enjoy a large range of PE and Sports in school.  Children represent our school in a range of competitions throughout each school year.  Many competitions are entered through our Outwood Together partnership or through direct entry in regional competitions.

To read our short blogs on the events which we take part in then please go to https://www.yourschoolgames.com/app/blogs/school/23846/

Last week, nine of our Year 6 boys and girls took part in the Bee Netball competition which was held at St Pauls Alverthorpe. After weeks of hard training, the children produced some fantastic Netball throughout their games and gave a really good account of themselves playing against some top Netball athletes from the other schools. Despite not winning, the team finished in a respectable 4th place. Well done Year 6.

Held at Slazengers Hockey club, six of our Year 5 and 6 girls took part in a very competitive Hockey event involving a number of teams from the Outwood Together cohort. There was some excellent hockey on show from all teams but despite not triumphing this time, our children represented the school fantastically and gave a good account of themselves.

Just a week on from the boys' competition, it was the turn of our Year 5/6 girls to compete in a wide range of Indoor Athletics events covering both track and field. As the boys did in the previous week, all of the girls performed incredibly well against some fantastic athletes. There were strong performances in the speed bounce and the relay to name a few. But even though there was no trophy this time, all of the girls can be commended on their attitude and behaviour. Well done girls.

Taking part in a wide range of events, 13 of our year 5 and 6 boys worked tirelessly throughout the competition demonstrating the high levels of sportsmanship, perseverance and resilience . Although we weren't able to win overall on the day, the continued enthusiasm shown by all our children is something to be proud of. An excellent effort against very strong competition from the Outwood pyramid.

Stanley Grove was proud to host the recent Year 5/6 Outwood Together Tag Rugby competition. Although our Year 5 and 6 teams did not win, all children who took part in the competition demonstrated a great deal of reserve, a high level of teamwork and sportsmanship. A real credit to the school.

Taking part in the Year 4 Multi-skills Festival, our boys and girls got the opportunity to experience a range of fun and engaging activities aimed at getting the children to experience something different with a focus still on 'keeping moving'. All of the children were enthusiastic for all of the activities, some of which included Curling, cup stacking and a relay version of moving with a shuttlecock whilst balanced on a badminton racket.

As part of our on-going commitment to promoting all sporting opportunities, eight of our Year 5 and 6 girls took part in the 'This Girl Can' Footie Festival. During the event the girls had the opportunity to play against a number of girls from the local area. Throughout the games, all of the girls demonstrated some great skills and a real togetherness. Well done girls!

Our year 2 children took part in the yearly Outwood Together Dance competition held at Wrenthorpe Academy whereby they performed a 3 minute routine to an audience. The routine was full of energy and included plenty of opportunity for both individual and group transitions. After a great performance by the children, they were awarded runners-up. Well done!

Twelve of our Year 4 and 5 students travelled to St Peters to take part in the Outwood Together Cross Country event. Each child showed a great level of competitiveness, attitude and respect regardless of winning or loosing. After some strong races, three of the children have qualified for the next stages of the Cross Country.

Thirteen of our Year 6 children took part in the end of Year Olympics themed competition. This involved the children competing in a range of sports including sprint, standing long jump, javelin and relay. All of the children performed incredibly well and although we did not finish in 1st place overall, the children were able to do the school proud by winning a number of events.

As ever, the school is proud of all the children's achievements this year and the enthusiasm that continue to show at all events. Well done!

Last Friday, 10 of our Upper Key stage children took part in a Tri Golf competition which was held at the Wakefield Golf Club. It was a new experience for the boys and girls and they thoroughly enjoyed being able to play a sport which is not common to them.

Last week, nine of our Year 3 boys and girls competed in the Year 3 Outwood Together Benchball tournament which was held at Middleton Leisure Centre. Despite facing tough competition in every game they played, each child performed to their best as individuals using the skills they had learnt in PE lessons and applied this as a team producing high quality Benchball skills. As just rewards, team Stanley Grove came home with the WINNERS trophy! A fantastic achievement.

Year 5/6 Outwood Together Kwik Cricket Tournament May 2019: Runners Up

Eight of our Year 5/6 children went to Wrenthorpe Cricket Club to take part in the annual Kwik Cricket tournament. It was a fun day had by the children as usual they performed to the highest standards, showing great character and skill and working enthusiastically as a team. After a full days play, the children finished as RUNNERS UP!

A well deserving achievement for all.

Our team of excited boys and girls recently competed in the Outwood Together Dodgeball event  which was held at Middleton Leisure Centre. Throughout the number of games, high levels of skills were seen from the children utilising what they had learnt in their PE sessions. Despite not winning the competition, our children came in a very respectful 3rd place. Well done to all of our children.

Temple Newsam was the host to the regional Cross Country finals and our two KS2 boys were in action in the Year 4 and 5 races respectively.

Both races were action packed with a range of districts being represented and despite our boys not placing in the top 3 finishes overall, they both finished in the top two out of the Wakefield competitors.

This week four of our KS2 children who had progressed from Outwood Together competition in November 2018, took part in the further stages of the KS2 Cross Country event which was held at Crigglestone All Blacks ARLFC. Each child, as ever, represented the school brilliantly and to the highest standards.

It was a great event enjoyed by all and we were highly delighted to celebrate the success of two of our children who finished 1st in their individual Year 4 and Year 5 races. Our two 1st place runners will now compete in the regional finals at Temple Newsam in March.

Recently 10 of our boys took part in the Indoor Athletics competition competing against all of the other schools in the Outwood Together cohort. Some of the events which the children competed in were speed bounce, vertical jump, standing jump and relay. All the children represented the school brilliantly and performed fantastically.

The children competed in the yearly Outwood Together Cross Country event which was held at St Peters Primary School. Despite having a small team, six of our children qualified for the next round to be held early next year. A huge well done to all children who took part. 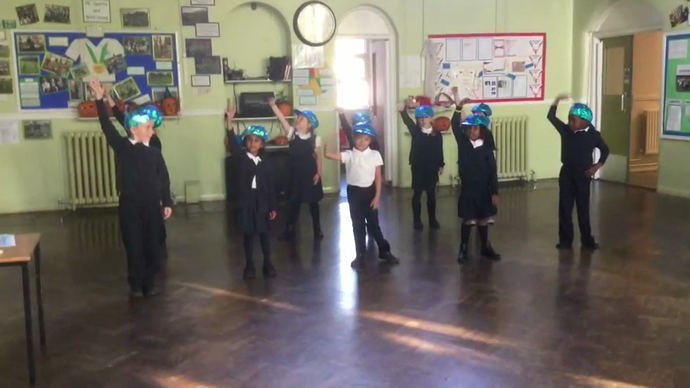 Well done to our fantastic year 2 pupils who won gold at the recent dance competition.

The girls from Year 4, 5 and 6 had a brilliant time at Stanley St Peters as part of the Girls Football League. Playing incredibly well and showing great flare and teamwork they came in first place. Well done girls on a fantastic achievement.

A number of year 5 and 6 children took part in a variety of track and field events at Stanley St Peters. All of the children did brilliantly, representing the school fantastically and achieving a 3rd place finish. Great job year 5 and 6!

Just this week, nine of our Year 5 children took part in the Kwik cricket tournament which was held at Wrenthorpe Cricket Club. With the sun shining down our children had a great time competing against a number of other schools in the area. Although they didn't win, all of the children thoroughly enjoyed the experience. Well done!

After performing their choreographed routines, our Year 4 children were excited to find out that they had come 3rd place in their Key Steps Gymnastics class category. A fantastic achievement by each child. This was then further celebrated in weekly KS2 assembly.

Five of our Class 4 children will take part in the Direct Entry Gymnastics competition this week. This will involve each child performing a routine which includes both floor and mat elements. Good luck Year 4.

Both boys and girls from KS2 took part in the yearly Cross Country competition held at Rooks Nest. The races themselves were competitive with great levels of athleticism on show ensuring close finishes. Again, all of the children represented the school exceptionally well.

Our Year 5/6 boys and girls took part in the Outwood Together cohort Netball tournament at St Pauls. They thoroughly enjoyed the experience and relished the competitive spirit displayed by all those involved on the day. All children were a credit to the school and showed some solid Netball skills!

A fantastic day had by all competing teams from the Outwood Together cohort. Girls and boys from Year 5 and 6 worked tirelessly to put on a show and our A and B teams represented Stanley Grove with incredible enthusiasm, perseverance and team spirit. Well done!

Recently, ten of our Year 3 boys and girls competed in the Outwood Together Benchball competition at St John's Primary School. Although they didn't win, it was great to see all of the children using the skills they had been practising in PE lessons and fundamentally working together as a strong team. As a result of this, they won four matches during the competition. A great achievement Year 3!