The school takes pride in the hard work it does in order to promote PE, Sport and Well-being within school, giving the children many opportunities to participate in a range of competitive sports, afterschool clubs and programmes linked into a wider healthier life.

We are pleased, to once again announce that we have been awarded the Gold award in the 'Your school games award'. This is an incredible achievement which again demonstrates our on-going commitment to providing all of our children with as many different and varied sporting opportunities in a range of different contexts.

We would like to thank all of the staff for their hard work, the parents for their continued support and most importantly, the children who always apply themselves and represent the school fantastically.

Certificates of recognition and achievement: Feb/March 22

Year 3, 5 and 6 children were awarded 'Bronze' certificate awards in recognition for their participation, points totals and attitude in the virtual Sports Hall Pentathlon event.

The boys and girls from each class took part in the Vertical jump, standing Long Jump, Speed Bounce, Shuttle Run and chest pass.

Congratulations to all of the children involved! 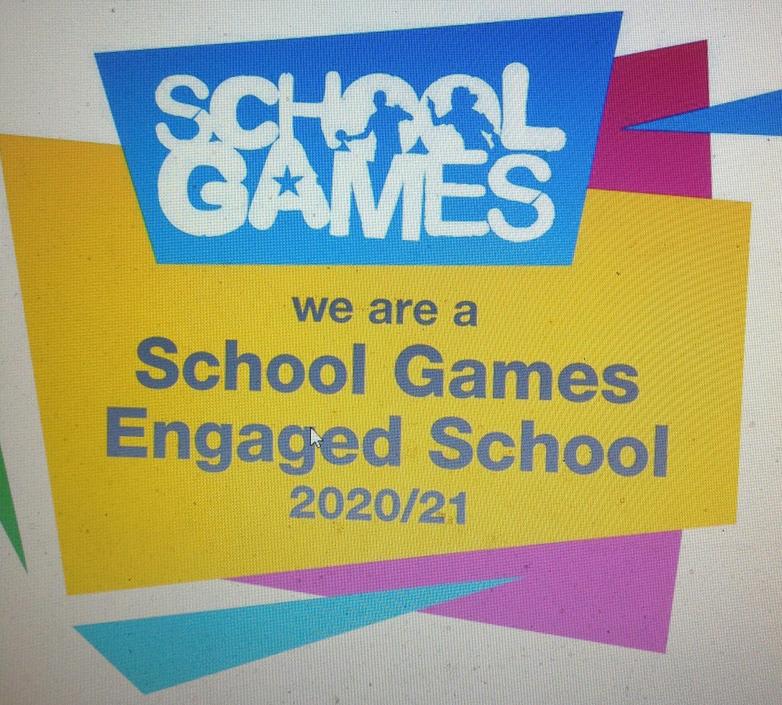 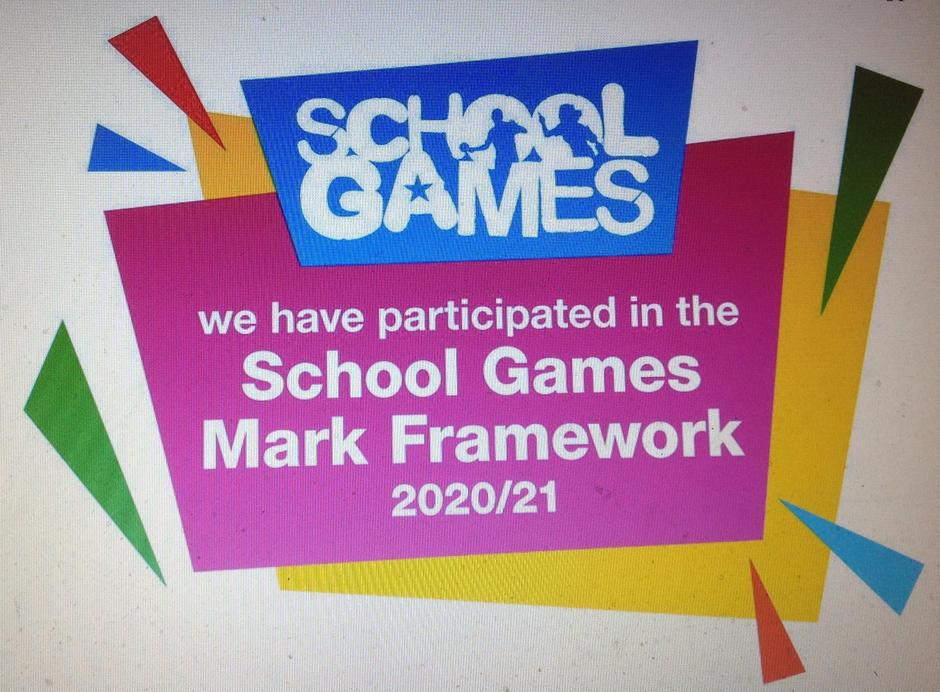 It was a lovely surprise to receive this certificate in the post from our local SGO Angela Daniel. This was in recognition of 'Successfully achieving the school Games Value: Determination for the Wakefield Virtual Cross Country 2020 event.

A huge well done again goes out to all of our children including our 3rd place Year 6 Boys team and 1st Place Year 5 Girls team!

After the excitement of the Virtual Cross Country competition in October, we had a wait to see how we had performed compared to the other schools in the Wakefield area.

It is with great pride and excitement that we can share the results of how we performed. In the respective races, all our classes showed great determination and spirit but there were two classes which stood out.

Firstly, this was our Class 6 boys, who came in a very respectable 3rd place out of 19 competing schools and consisting of 128 participants.

Secondly, our Year 5 girls who finished 1st place in a cluster consisting of 19 schools from the local area and 112 participants. 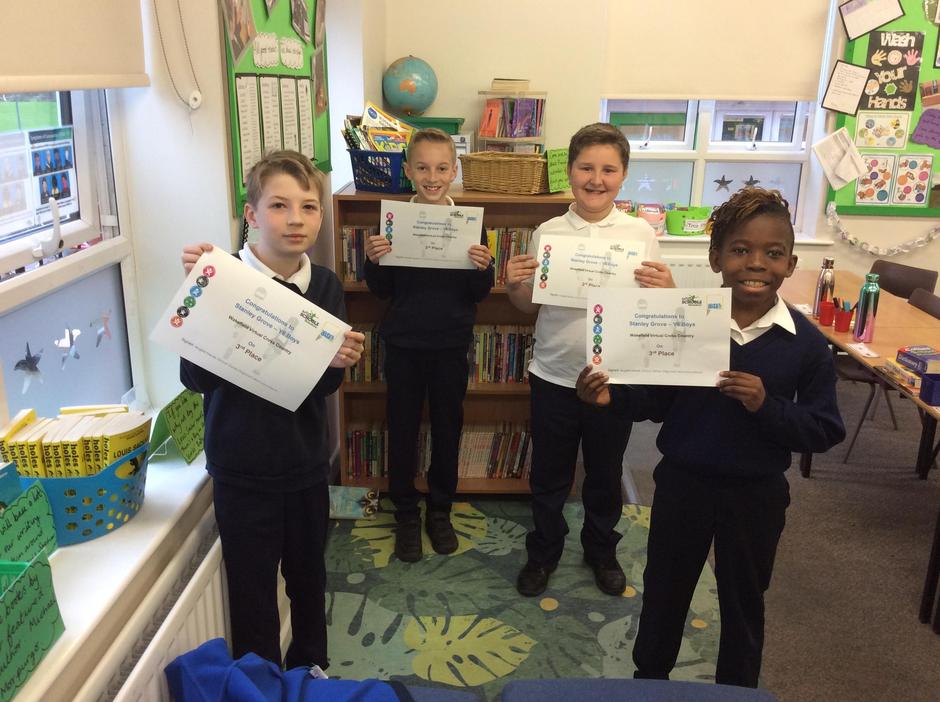 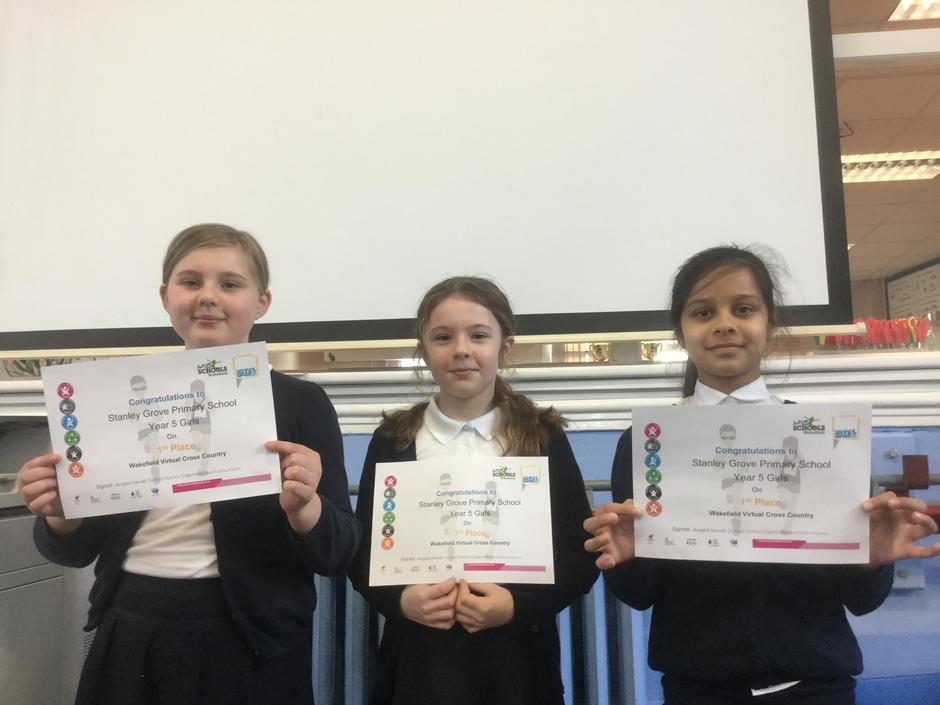 We are proud to announce that for the 4th consecutive year the school has been awarded the Gold School Games Kitemark award. The school has received the 'Gold' award as a result of the thorough discussions which took place between the School Games Body, SGO's, Development coaches and a most importantly a sample of schools who in 2019 achieved either Bronze, Silver or Gold status.

We are extremely pleased to receive the award as we feel it demonstrates our continued commitment, engagement and delivery of competitive school sports despite the current on-going situation.

We are proud to announce that for the 3rd consecutive year the school has been awarded the Gold School Games Kitemark award. This award is given in recognition of our continued commitment, engagement and delivery of competitive school sports. We would like to say a big thank you to all of the staff who work tirelessly, you the parents for your continued support and most of all the children who continue to shine.

In June nine of our Year 3 boys and girls competed in the Year 3 Outwood Together Benchball tournament which was held at Middleton Leisure Centre. Despite facing tough competition in every game they played, each child performed to their best as individuals using the skills they had learnt in PE lessons and applied this as a team producing high quality Benchball skills. As just rewards, team Stanley Grove came home with the WINNERS trophy! A fantastic achievement.

Totally blown away by how amazing our pupils were today! They worked hard, enjoyed themselves but I’m most proud of how they stood as a team! Worked well, encouraged and supported each other.

We were lucky enough to have 2 games ‘rest’ as we weren’t drawn to play in the first games. This gave us chance to warm up and practise our skills.
Our first game saw us win 4-1 with an extremely energetic performance. Moving on, we breezed though our next games winning every one!

This saw us through to the semi finals which ended in a sudden death penalty shoot out. Holding their nerve our pupils scored their goal and then saved the oppositions goal! Super work!
This lead us to the final. After a great game the score remained 0-0. Another tense penalty shoot out didn’t go our way leaving us as very respectable runners up and bringing home a trophy for our every expanding trophy cabinet at school.
However, we did take the title for highest points scored in the whole competition, that makes us the best out of the 12 teams who entered the tournament!

I’m so proud of the whole team. They worked so well as a unit and represented our school beautifully. A very deserved Runners-up finish for Team Stanley Grove!

Temple Newsam was the host to the regional Cross Country finals and our two KS2 boys were in action in the Year 4 and 5 races respectively.

Both races were action packed with a range of districts being represented and despite our boys not placing in the top 3 finishes overall, they both finished in the top two out of the Wakefield competitors.

Recently, twelve children from across KS2 took part in the Cross Country event held at Stanley St Peters. After a gruelling afternoon of competition, we are pleased to celebrate the success of all the children who showed great determination, an excellent sporting attitude including fair play and a never give in attitude. In particular, we would like to give further congratulations to those six children who now go on to the next stage of the Cross Country competition in the wider Wakefield area.

In late September 2018, some of our Year 4, 5 and 6 girls took part in the Girl's football league held at Stanley St Peters. After an exhausting afternoon where the girls showed a great determination to succeed, work together as a team and support each other they finished in 1st place. A massive achievement for our KS2 girls. Well done!

The school is very proud of the School Games Gold Award it currently holds. This reflects the diverse range of sporting opportunities on offer to our children within lessons, in competitions and afterschool provisions.

Our team of six Year 2 children recently took part in a KS1 Dance competition held at Wrenthorpe Primary Academy. Consisting of eight teams from within the Outwood Together cluster, the children showed excellent dance moves and a great team spirit resulting in them coming home with the runners up trophy. A fantastic achievement celebrated by all.

Year 1-2 celebrating with their Runners-up trophy in Outwood Together Dance Competition.

Unfortunately not the ones with chocolate chips.

Some cookies are necessary in order to make this website function correctly. These are set by default and whilst you can block or delete them by changing your browser settings, some functionality such as being able to log in to the website will not work if you do this. The necessary cookies set on this website are as follows:

Cookies that are not necessary to make the website work, but which enable additional functionality, can also be set. By default these cookies are disabled, but you can choose to enable them below: